Oregon voters took the historic step of decriminalizing possession of all drugs at the ballot in 2020—and a new poll shows that the policy continues to enjoy majority support in the state.

Data for Progress surveyed likely voters about the reform, finding that not only do most people (72 percent) agree with the basic idea that substance misuse should be treated like a public health issue rather than a criminal justice problem, but a majority (58 percent) also says that the voter-enacted initiative should stay in place.

At a top level, there’s majority, bipartisan consensus on the debate over taking a public health versus criminal justice approach to addiction. Democrats are most likely to side with public health at 90 percent, followed by independents at 66 percent and Republicans at 54 percent. 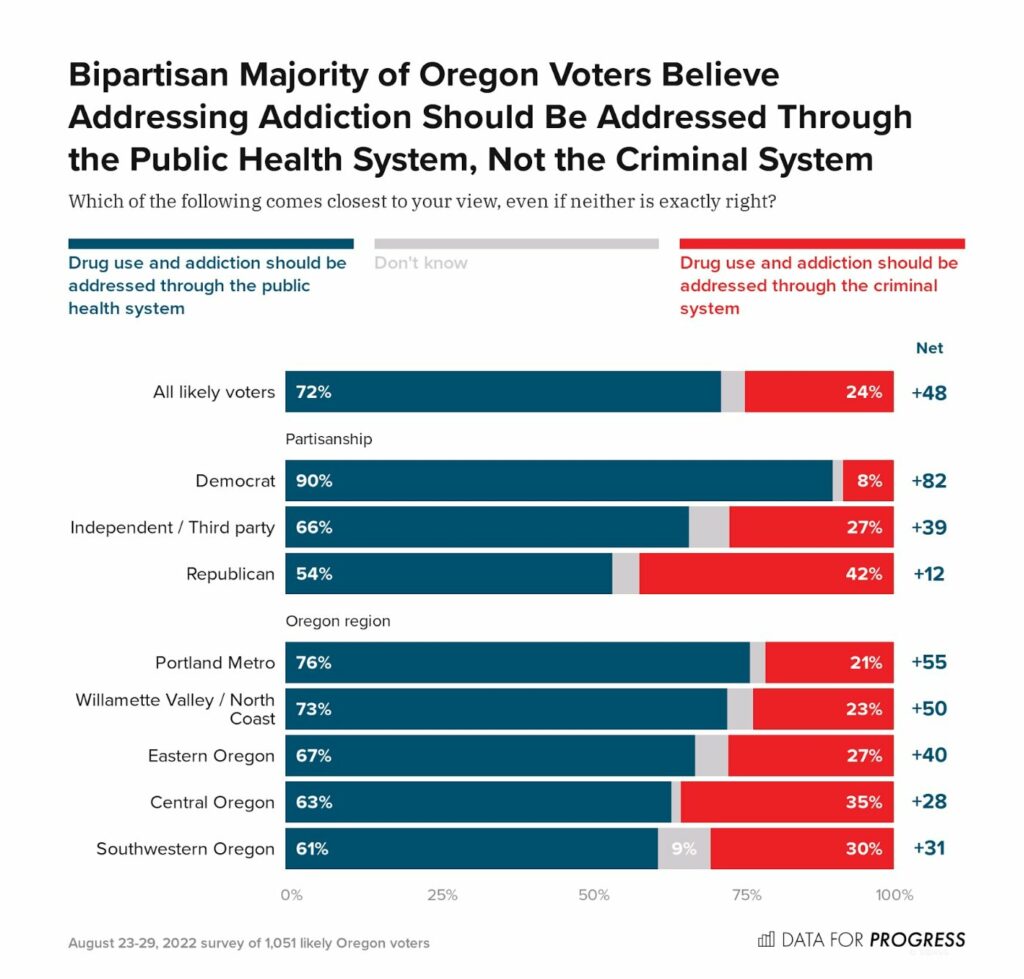 Pollsters then asked likely voters about the specific initiative, Measure 110, that passed decisively about two years ago. A party breakdown shows majority support for keeping the policy intact among Democrats (82 percent) and independents (56 percent), though only 31 percent of Republicans agree, while 65 percent said the law should be repealed.

That was before being asked about specific components of the initiative, which not only decriminalized low-level drug possession but also directed a portion of cannabis tax revenue toward substance misuse treatment programs. 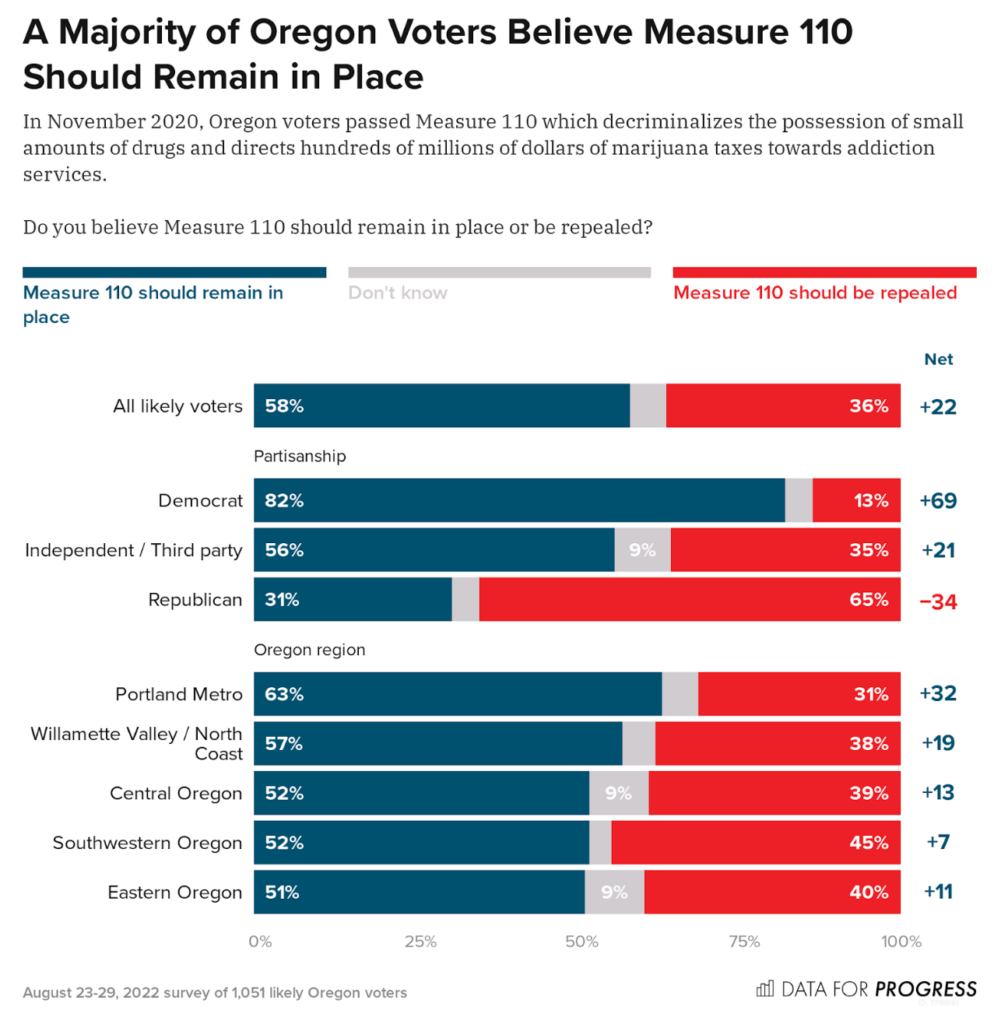 Measure 110 was multilayered, however, and so the survey also broke down the key provisions and found that, upon further explanation, each of the main components are either strongly or somewhat supported.

For example, 91 percent of respondents said that they back providing peer support mentoring for people struggling with substance misuse, 90 percent favor giving people resources to achieve and retain employment, 86 percent support the funding for addiction recovery and 61 percent said they support the elimination of criminal penalties for personal use possession of currently illicit drugs. 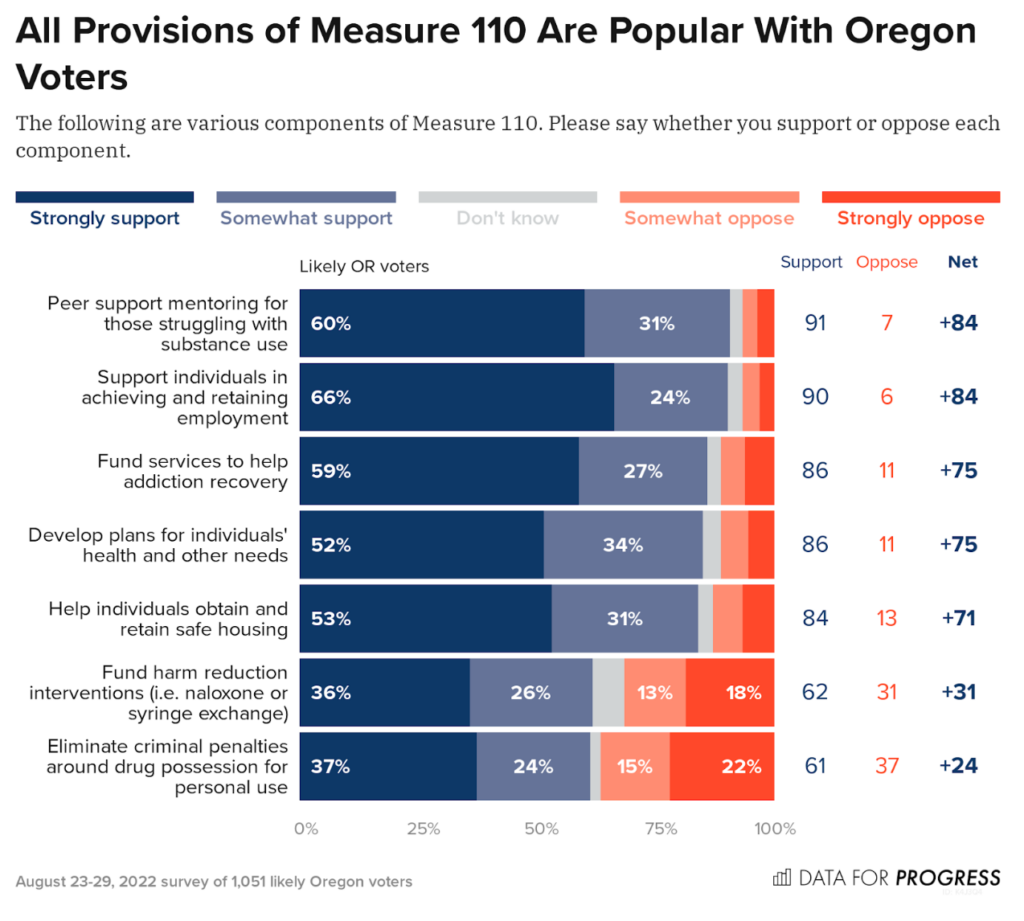 After going through the various components, Data for Progress then framed an additional question about support for the overall initiative in a different way.

Likely voters were asked whether they think Measure 110 should remain the law “so that Oregonians are not punished for mental health and continue to have better access to addiction services” or believe it should be repealed to “return to arresting people caught with any amount of drugs, and defund the services that Measure 110 has funded.”

With those options, 61 percent agreed with the former statement, while 30 percent opted for a repeal. Support went up a few percentage points in each partisan demographic breakdown as compared to the initial question in the survey on whether Measure 110 should remain the law. 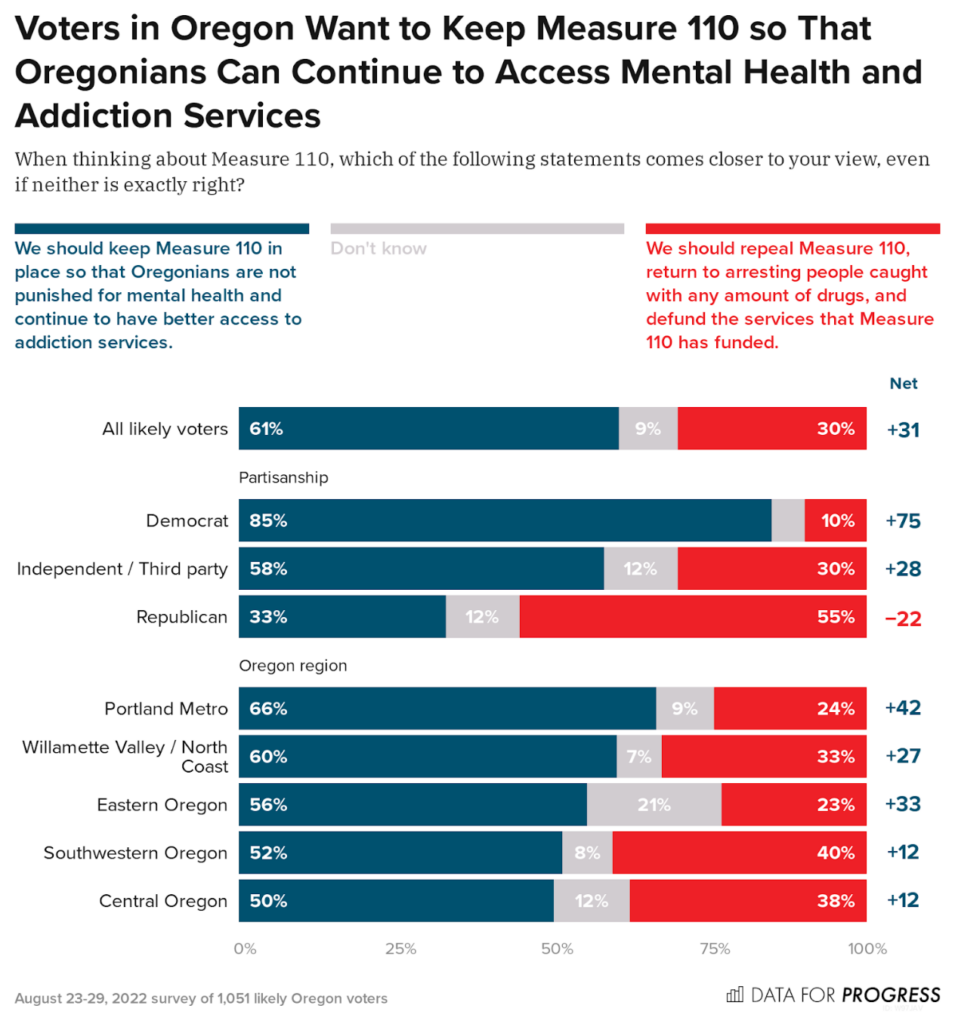 A strong majority of Democrats (85 percent) said that they agreed in maintaining decriminalization for the public health purpose, as did independents (58 percent). Thirty-three percent of Republicans said that the law should stay, compared to 55 percent who said the law should be repealed.

Finally, the poll inquired about the perceived impact of the measure, with 69 percent of likely voters saying that problems such as crime and homelessness are attributable to outside factors “including poverty, lack of affordable housing, and untreated mental health problems.” Just 28 percent said crime and homelessness could be linked to decriminalization. 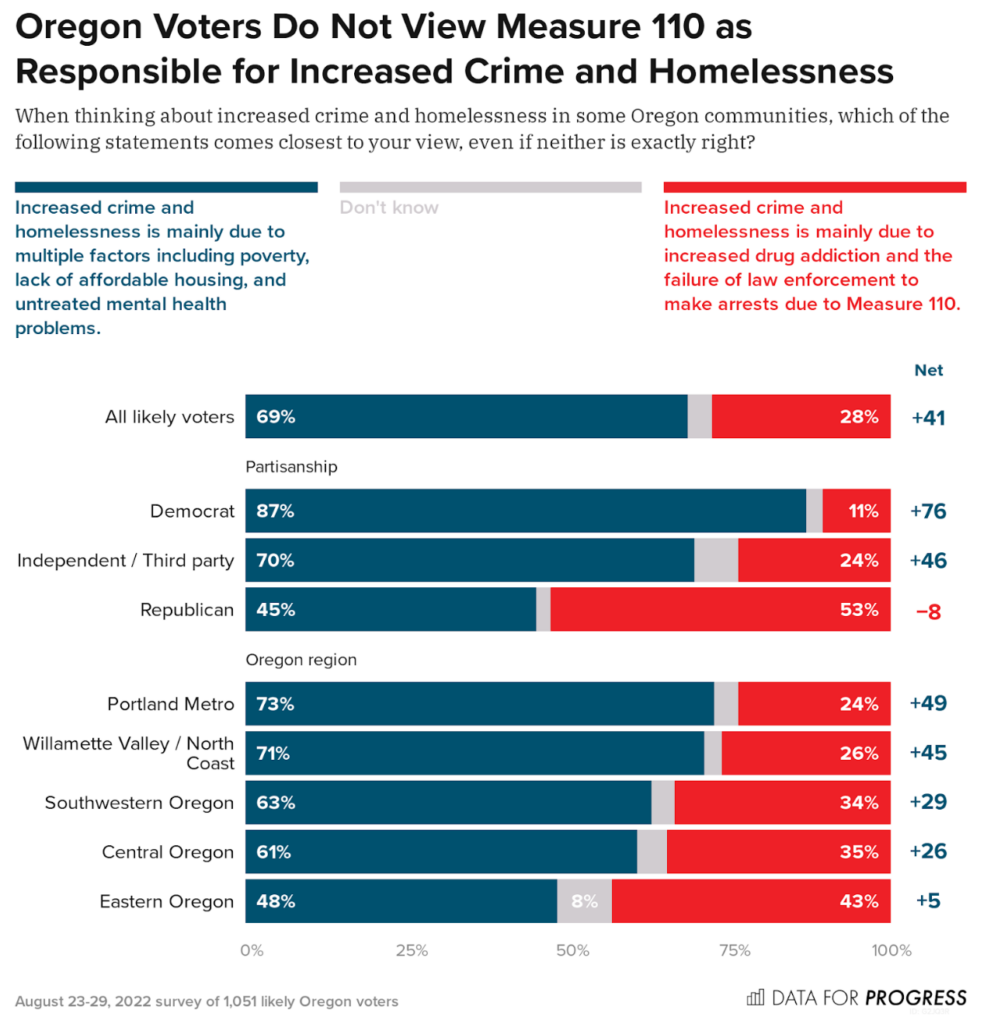 The party-based trend was generally consistent, with 87 percent of Democrats and 70 percent of independents saying that the social issues were related to ancillary policy factors, while 45 percent of Republicans said the same.

“Since Measure 110’s passage, the debate about the effects of the law and whether it should remain in place has intensified,” Data for Progress said. “Our polling shows that Oregon voters continue to support the measure now, as they did when they voted on it in the 2020 election, and want the measure to continue to provide resources to Oregonians to support addiction recovery. It should be clear to state lawmakers that their voters want Measure 110 to be preserved, protected, and bolstered.”

The survey involved interviews with 1,051 likely voters in Oregon from August 23-29, with a +/- three percentage point margin of error.

A strong majority of Americans, including most Republicans, support drug decriminalization, according to a national poll released in April. There’s also majority support overall for allowing the operation of overdose prevention centers where people can use illicit substances in a medically supervised setting and receive treatment resources.

Support for the decriminalization proposal increased by 10 percentage points overall since voters were asked about it last year with a different question in a prior Data for Progress poll.

Nora Volkow, director of the National Institute on Drug Abuse (NIDA), said recently that the ongoing criminalization of people over drug use needs to end in order to effectively address substance misuse and the stigmatization of addiction.

Meanwhile, the campaign behind an effort to decriminalize drugs and expand treatment and recovery services in Washington State said in June that it has halted its push to qualify an initiative for November’s ballot.