New York and New Jersey marijuana regulators briefly sparred on Twitter on Tuesday over which state took a better approach to launching its adult-use cannabis market. But after suggesting that New Jersey put profits ahead of equity, New York officials deleted their post.

Aww…on our first day we did 12, but congrats on this one, it's cute! Congratulations, NYC!

“Aww…on our first day we did 12, but congrats on this one, it’s cute! Congratulations, NYC!” the commission teased.

The New York Office of Cannabis Management (OCM) was quick to hit back, defending its more gradual rollout as a deliberate strategy to ensure that the state’s market puts equity first with businesses operated by people most harmed by the drug war. 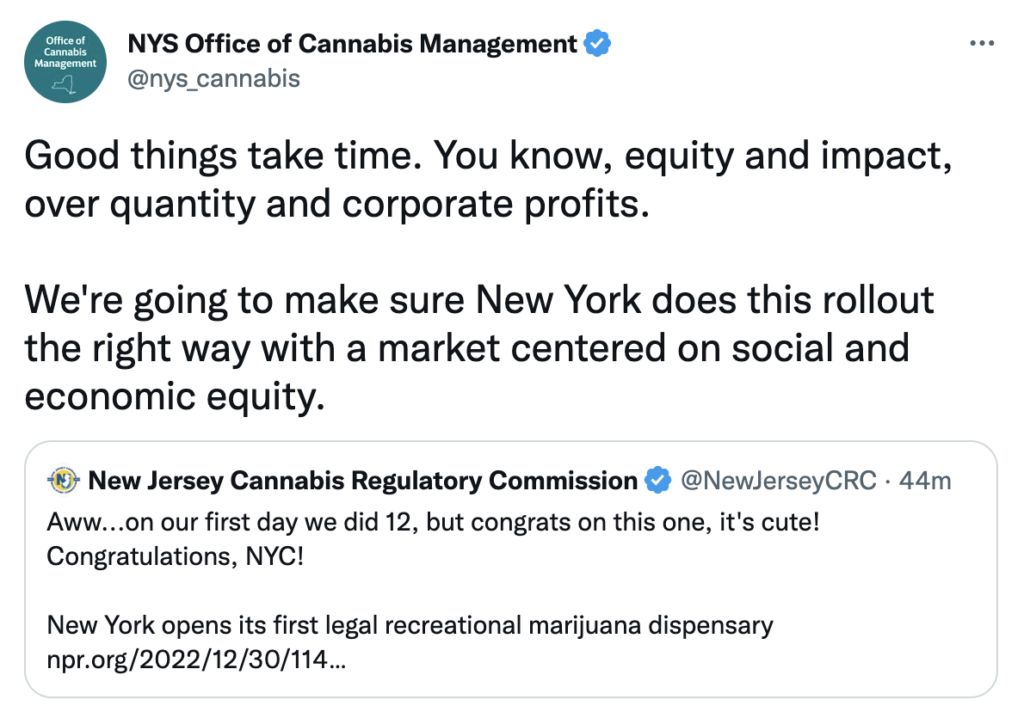 “Good things take time. You know, equity and impact, over quantity and corporate profits,” OCM said in the since-deleted post. “We’re going to make sure New York does this rollout the right way with a market centered on social and economic equity.”

Marijuana Moment reached out to New York’s OCM for clarification about why the tweet was deleted, but a representative did not immediately provide an explanation.

While New York currently has just one adult-use shop open for business, regulators have approved a total of 36 Conditional Adult Use Retail Dispensary Licenses (CAURDs), most owned by people who have been harmed by marijuana criminalization and others that will be run by non-profit organizations.

The shop that opened in New York last week is operated by the nonprofit organization Housing Works, which focuses on addressing AIDS and homelessness issues.

Meanwhile, there are 21 recreational dispensaries operating in New Jersey, where the first adult-use sales launched in April 2022. The majority of those are owned by a cluster of large, multi-state operators—a point of contention for advocates.

The state recently reported that sales exceeded $100 million for the first time in the third quarter of the 2022 fiscal year, with combined medical and recreational cannabis purchases totaling $177,710,764.

While the Twitter spat between the regulatory bodies seems to be mostly good humored, it does speak to one of the most central debates in the cannabis space: how to balance equity with commercial interests in the era of legalization.

New York officials have said on numerous occasions that they will continue to prioritize the former, and that starts with letting those who’ve been harmed by criminalization at the front of the line to participate in the market.

Additionally, the state recently selected 10 teams of firms to build out about 150 turn-key storefront facilities for social equity marijuana retailers to operate out of as the market opens up.

New Jersey officials have worked to support the industry, but some advocates have questioned certain market-forward policies such as the ongoing ban on home cultivation for adult consumers.

Gov. Phil Murphy (D) said in November that the state should “revisit” its current criminalization of homegrown marijuana for personal use—but he thinks that conversation should happen at a later point after the commercial market has matured.

Meanwhile, NJ-CRC has been receiving public input on the most effective ways to use cannabis tax revenue to invest in social equity.

In Connecticut, meanwhile, the state’s first adult-use shops are set to open next week.

Also in the region, Rhode Island’s first recreational cannabis sales started at the beginning of December.