“It’s a disparity that has persisted for years, despite data showing that Black and white residents use cannabis at similar rates.”

Black Minnesotans are nearly five times as likely to be arrested on marijuana charges as white ones, according to the latest data from the Bureau of Criminal Apprehension.

It’s a disparity that has persisted for years, despite data showing that Black and white residents use cannabis at similar rates. The recent statewide legalization of certain marijuana edibles is likely to draw even further scrutiny to marijuana policing practices. 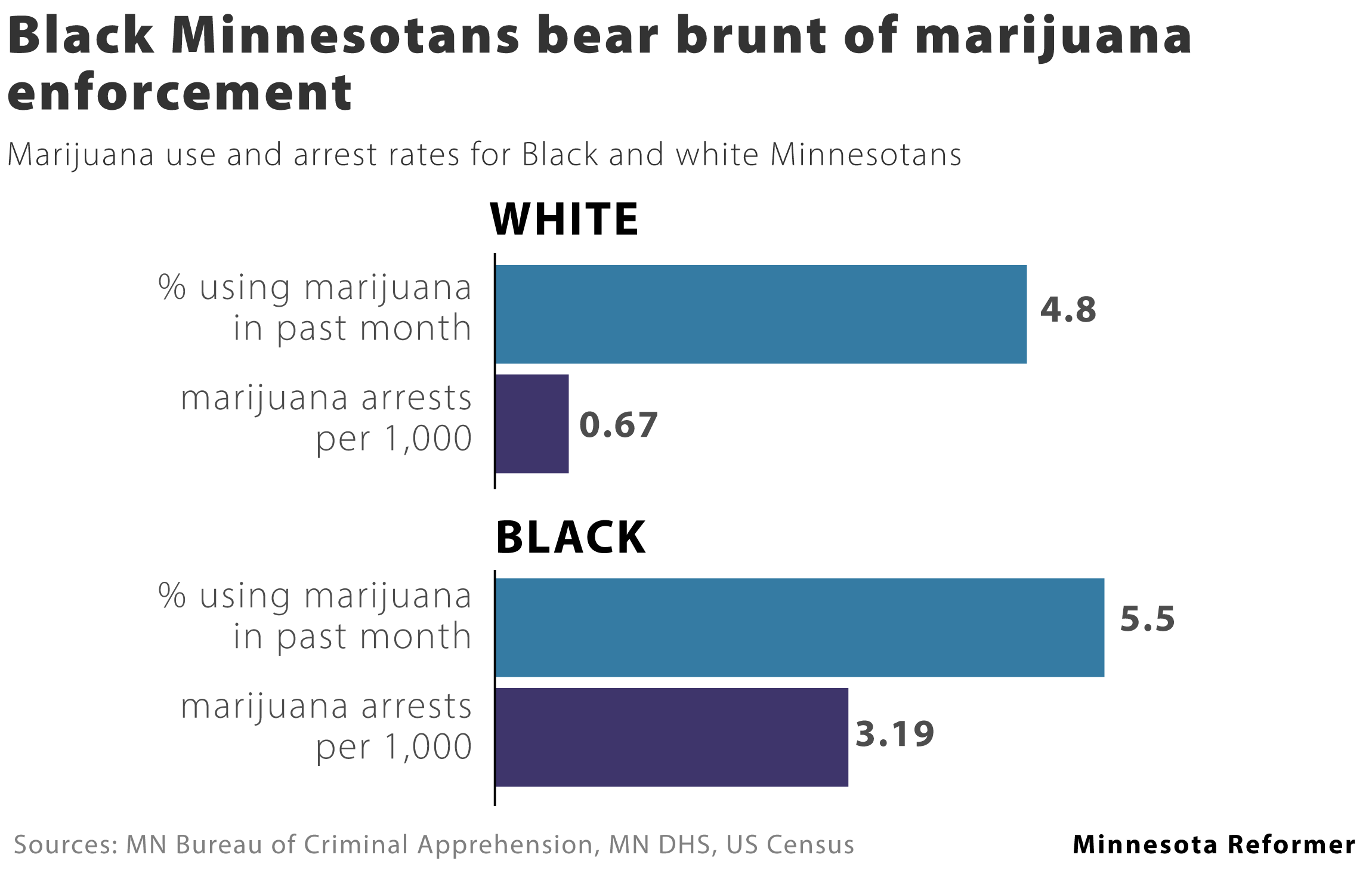 Because marijuana is decriminalized in Minnesota, many incidents listed as possession “arrests” in the state database are actually citations for possession, somewhat akin to a traffic ticket. But the data does not distinguish between such a citation and a normal arrest involving handcuffs and potential jail time.

Nevertheless, marijuana citations can be highly disruptive if they’re used as pretexts for more invasive policing behaviors, like searches and interrogations. That’s especially true in places where interactions between police and citizens are fraught due to a history of biased policing and civil rights violations. Any encounter with law enforcement has the potential to escalate into a lethal situation.

Racial disparities on marijuana arrests are considerably higher in Minneapolis and St. Paul than elsewhere in the state. In Hennepin and Ramsey counties, Black residents are nearly 8 times more likely than white residents to be arrested on marijuana charges. The available data suggests that Black and white Twin Cities residents use marijuana at similar rates, as they do across most of the country.

In 2018 Minneapolis police launched a series of stings against low-level marijuana sales in the city. The program was abruptly halted after the Hennepin County public defender’s office noted that 46 of the 47 arrests were of Black suspects, prompting concern over racial profiling.

“The fact that racial disparities are so common nationwide in the enforcement of marijuana laws is one of the reasons I support full legalization,” Minneapolis Mayor Jacob Frey said in a statement at the time.

Earlier this year, Minnesota lawmakers approved a first-of-its-kind bill legalizing low-dose THC edibles derived from hemp. Advocates hope that legislation will lead to a more robust legalization bill in the coming years. A recent straw poll of Minnesota State Fair-goers conducted by the state House of Representatives found that just over 60 percent supported legal marijuana, a share that’s crept up in recent years. Polling by news organizations pegs support at closer to 50 percent, with fewer than 40 percent opposing.

Reformers often cite eliminating racial arrest disparities as a key reason for legalizing the drug. But the experience of other states suggests that simply changing the law isn’t enough to change police behaviors: In 2020 the ACLU found that legal states saw decreased rates of marijuana possession arrests, coupled with racial disparities that shrunk but didn’t disappear completely.

This story was first published by Minnesota Reformer.