Illinois marijuana sales reached a record high of more than $1.5 billion in 2022—and this past December marked the strongest sales month to date—officials announced on Friday.

The Illinois Department of Financial and Professional Regulation (IDFPR) said that “2022 set adult use cannabis sales records in all categories it tracks.” 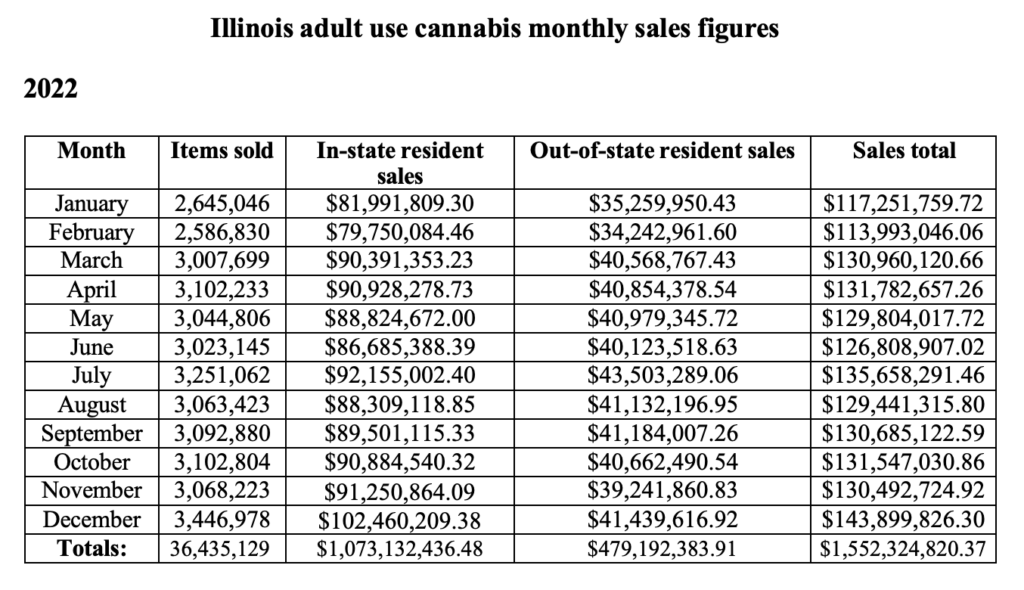 “When I signed the Cannabis Regulation and Tax Act into law in 2019, we set out on an ambitious goal: to create the most equitable and economically prosperous cannabis industry in the nation,” Gov. J.B. Pritzker (D) said in a press release. “Our data from 2022 shows that we are well on our way towards making that idea a reality.”

The new figures don’t include medical cannabis sales, which are tracked separately by a different agency.

Officials also touted the fact that Illinois currently has 113 retail dispensaries operating in the state, including three social equity licensees that were approved last year after a protracted effort by the administration to start fulfilling equity goals.

“Not only did we break our previous sales record by more than 12 percent with a total of more than $1.5 billion, we also saw the first of our social equity adult use cannabis dispensaries open their doors for business—paving the way for an even stronger 2023,” Pritzker said.

IDFPR Secretary Mario Treto said that 2022 “marks the second straight year that Illinois’ adult use cannabis industry has seen record-setting growth, and we are excited for what the future holds for the most equitable cannabis industry in the country.”

“We are optimistic the industry will only continue to flourish in 2023, as we welcome more dispensaries to Illinois,” he said.

For the 2022 calendar year, the state crossed the $1 billion mark in August—two months earlier than it took to reach that milestone in 2021.

Last year, Pritzker separately touted the state’s marijuana sales and resulting tax revenue for the 2022 Fiscal Year. Illinois collected $445.3 million in tax dollars from $1.5 billion in cannabis sales during that period. That’s a 50 percent increase is cannabis tax dollars compared to the prior fiscal year.

But there’s still work to be done, officials concede. In September, state regulators released a report that revealed a glaring lack of diversity among business owners in the adult-use marijuana market. It also outlined a plan to begin turning that around in the current fiscal year, with the industry set to significantly expand as nearly 200 new social equity businesses come online.

The governor and other state officials have emphasized that they’re committed to ensuring that portions of tax revenue from the marijuana market go toward community reinvestment, as prescribed under the state’s legalization law.

In June, Illinois officials announced that the state was awarding $45 million in grants funded by marijuana tax dollars to support community reinvestment in areas “hardest hit by the failed war on drugs.”

That marked the second round of funding that’s been made available through the state’s Restore, Reinvest, and Renew (R3) program, which was established under Illinois’s adult-use cannabis legalization law.

In addition to providing community reinvestment funding, the governor announced in 2020 that his office had processed more than 500,000 expungements and pardons for people with low-level cannabis convictions on their records.

Pritzker also signed legislation last year that will make it so courts cannot deny petitions to expunge or seal records based on a positive drug test for marijuana.

A state-funded initiative was also established to help residents with marijuana convictions get legal aid and other services to have their records expunged.